Disclosures Under Section 4 (1) (B) Of The Right To

The particulars of its organization, functions and duties:

The Chief Commissioner is the head of Tiruchirappalli Customs (Preventive) Zone, which has jurisdiction over the Customs work (Import and Export and Prevention of smuggling) in the whole of the State of Tamil Nadu (excluding the areas falling under the jurisdiction of the Principal Chief Commissioner of Customs, Chennai Zone) and Puducherry Union Territory except Mahe and Yenam.

The main functions of the Commissionerates include the levy and collection of custom duties, prevention of smuggling and evasion of duties, besides all administrative matters relating to customs formations under this zone.

The hierarchy of the officers is as under: 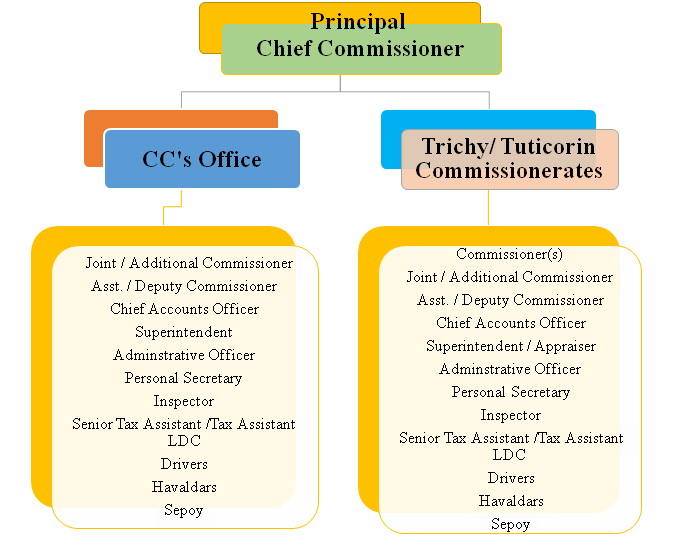 POWERS AND DUTIES OF OFFICERS AND EMPLOYEES[Section 4(1(b)(ii)]:

The powers and duties of the officers are defined in the Customs Act, 1962 and GST Act, 2017 and the Rules made there under, which are available in public domain.


(iii) Rules/orders under which powers and duties are derived:

As mentioned in the Table above.

Office of the Chief Commissioner of Customs (Preventive) is primarily an administrative / monitoring unit. It monitors the activities of Executive Commissioneratesfalling under the zone.

Commissionerate is headed by a Commissioner, who is the final decision-making authority with regard to disputes regarding levy and collection of Customs Duty in his/her jurisdiction.

The procedure followed by the officers in the decision-making process and different aspects of supervision, accountability for taking decisions are outlined in the Customs Manual, the Adjudication Manual, Audit Manual, Customs Appraising Manual and Customs Preventive Manual etc. The procedure indicated in Manual of Office Procedure (MOP) are also followed for decision-making.

(v) Channel of supervision and accountability:

NORMS FOR THE DISCHARGE OF ITS FUNCTIONS[Section 4(1 (b)(iv)]:

(i) Nature of functions/ services offered:

To carry out the mission of CBIC to administer Customs and GST and Central Excise, laws aimed at:

To The said objectives are sought to be achieved by:

(iii) Process by which these services can be accessed: Not Applicable

(iv) Time-limit for achieving the targets: Time limit for taking decisions are outlined in the Customs Manual etc.

(v) Process of redress of grievances:

The aggrieved citizens may submit their grievances online through CPGRAM Portal for speedy and favorable redressal at https://pgportal.gov.in/ or by any other mode.

The grievances received are examined by the Section dealing with the matter and if found genuine necessary action for redressal of the same is taken accordingly by the competent authority. If the grievance pertains to the filed formations under the jurisdiction of this office, the same are forwarded for their comments or necessary action and final decision is taken based on the verification report received from the field formations. Decision on the grievances is conveyed to the CPGRAM portal or by Post, from where the same is received.


Details of Officers with charges held

NIC Cloud
Site is hosted at NIC, Government Of India. Contents on this website is published and managed by Web Team of Office Principal Chief Commissioner of Customs Preventive Zone, Tiruchirapalli, coming under Central Board of Indirect Taxes and Customs, Department of Revenue, Ministry of Finance, Government of India.